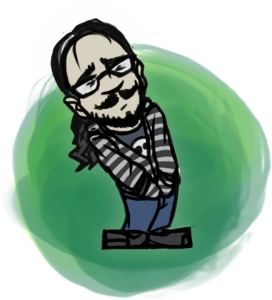 So first off, let me get this out of the way… It’s been a while since my last post and I think I got a bit nervous after the last one. That’s because just a few weeks after I posted about how “all of us were getting along so splendidly!” … Travis and I had to let somebody go. Thbpt. Personally, I’d really like to avoid posting about it except I promised to be forthright and I feel it’s an important concept to address for anybody interested in starting up a team.

In defense of my authenticity, while writing my last post, I truly did believe that everything was 100% golden. The entire ongoing clash between my friend and I always felt like an amazing misunderstanding just waiting to be cleared up. I assumed that it was all simply the birthing pains of having an obstinate friend trying to find their place within the team. And at the time of my posting I thought it really was all over and done with.

The reality was that it was a problem that wasn’t going away and was just going to become a larger liability as the team got bigger and the roles each of us played became more and more crucial.

I still believe that friends are the best people to hire because they keep you honest and provide the greatest chemistry.  But it’s also good to remember that everybody has their own motivations for having friends. And you have to ask yourself whether or not those motivations will help the team. Everybody has their ticks and their traits that are a side-effect of who they are – and not something that can be set aside without great effort. Really, you don’t want to find yourself asking somebody to not be themselves. In a creative field you need a person to be 100% themselves to accomplish their greatest feats. But the question you have to ask yourself is how those habits will come out to play in a team setting.  Simple friendship isn’t enough to promise a good result. The person you can cherish having late night philosophical debates with might end up being a person who truly seeks out domination in all their affairs and will never choose the team over the opportunity to win something.

Really it all came down to who was “right”. Sometimes I was. Sometimes they were. But the reality of the way a team works is that you have to choose your battles. And hopefully the desire to accomplish great things as a team naturally limits you on what you chase after. The desire to work together has to be stronger than your own needs for vindication. That motivation is a must. A group of people, each wanting to be “right” wont create anything beautiful. Anybody who thinks the point of team is to avoid making mistakes isn’t going to make it. Because the benefit of good teamwork is everybody seeing the same bigger picture. And the greatest ideas are intangible things that have to be felt rather than explained.

The best way I can describe this is through the concept of communication. All it takes is a lack of interest to completely misunderstand somebody.  Because words are merely indicators of greater concepts.  It requires true motivation to see those intangible structures.  Somebody has to want to see it to see it.  And if all they want at their core is to be seen, then they’ll never see it. And everything you do will be filler until you say the thing necessary for them to be seen.  We’ve all had those conversations that go in circles.  It’s not because what you said wasn’t enough to ignite understanding.  It’s because understanding was never the plan.

We just added the Other Projects page to document all the fun projects we get to work on outside of PS4 themes. First thing we added was a bit about a project I worked on with a couple of old friends of mine. It was a trailer for a book called “Nightmares Unhinged”.  Check it out!

We put a lot of effort into Aurora Borealis. The background music was a special find – really makes the whole thing magical.

Alpha Cat Zingano was a fun one to work on because I got to meet Ms. Zingano herself.  She’s a MMA bad-ass! I thought it was going to be super intimidating standing next to somebody who could snap my spine in a second, but she was SO nice! And goofy! What a relief. Then I watch her pummel faces and it’s so crazy. Rooting for you Cat! You’re awesome!

And Misty Pathway is the first theme in a long line of themes we will be doing with a local photographer, Joshua Hicks. The dude’s stuff is incredible. Really looking forward to transforming all of his photos into awesome themes.

More stuff in the works so stay tuned!

This site uses Akismet to reduce spam. Learn how your comment data is processed.